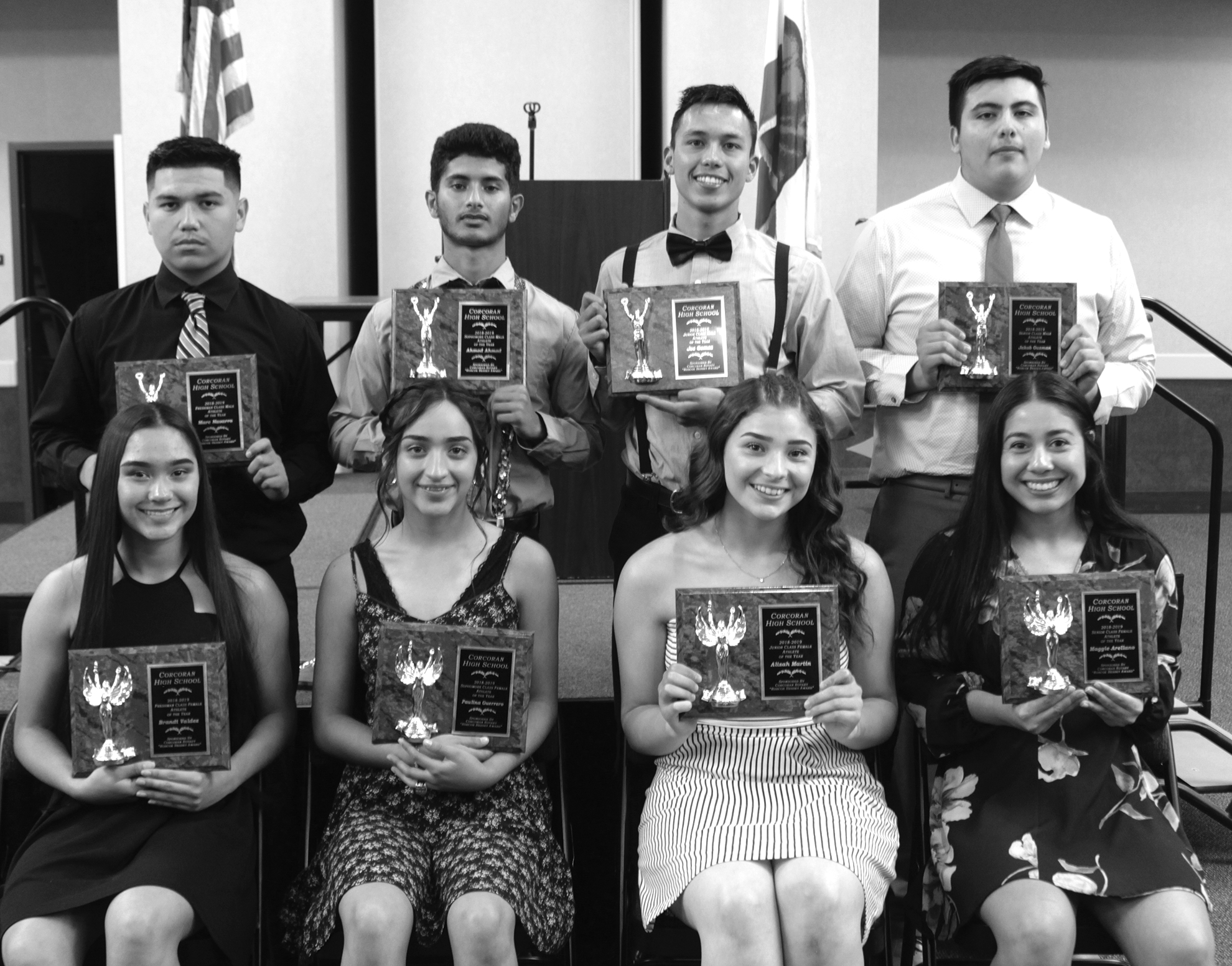 CHS Class Athletes of the Year

Corcoran High Class Athletes of the Year were honored during last week’s Athlete of the Year banquet which was held in the Technology Learning Center at CHS. A female and male athlete of the year are chosen in each class. The following are the winners.

For the senior class Maggie May Arellano and Jakob Guzman were the Class Athletes of the Year winners.
Maggie May Arellano was a two-sport athlete this year, earning a varsity letter in track and field where she participated in the pole vault for her East Sequoia League champion girls’ track team that swept all of this year’s mini-meets. It was the fall season of sport however where Maggie left her mark. Once again, she led her girls’ tennis team to an undefeated 12 -0 league title; her fourth consecutive league championship that ended with a combined league record of 52 wins and zero losses. In addition to winning back to back valley championships, Arellano was this year’s tennis team’s Most Valuable Player Award winner. Maggie also competed in the Area Individual’s Tennis Tournament this past season.

Jakob Guzman is a three-sport athlete this year lettering in football, basketball and the just finished season of track and field. Guzman lettered in and was a member of Corcoran’s undefeated boys’ track East Sequoia League Championship team. In the fall, Jakob earned All-East Sequoia League’s first team honors and was also awarded the Golden Panther award for football. Guzman continued his success in the winter, once again earning All-League honors in basketball and winning the Jason Gomez “Panther of the Year” Award for his hustle and success on the basketball court.

For the Junior class Alizah Martin and Joe Gomez were named the Class Athletes of the Year winners.
Alizah Martin a three-Sport athlete who lettered in varsity basketball, JV volleyball and varsity softball. As a member of the CHS basketball team, Martin played an instrumental role in the girls’ team reaching the playoffs for the first time in three years. As a member of the Panther JV volleyball team, Alizah earned her letter for her determination and skill on the court. And, during the just completed softball season, Martin earned the Most Improved Player award from Coach Matt Romero after finishing the league season with a 10-2 record and a second place finish in the East Sequoia League.

Joe Gomez excelled in varsity cross country and track this year. During the fall, Gomez led the CHS cross country team to an undefeated East Sequoia League season and finished individually in the Top 10 at the Valley Meet, and Top 15 in the entire state of California. For the just completed track season, Joe earned All-League in the 800 meter, 1600 meter, 3200 meter and in the 4×400 meter relay team. He also advanced to the Masters Valley Meet in two events and led the team in scoring with an unheard of 171 points this year.

Paulina Guerrero is a two-sport athlete who led her cross country and track teams this year. In cross country Paulina placed in the Top 10 at the valley meet leading her team to a second place finish. Paulina earned the team’s Scholar Athlete of the Year Award. In track, Paulina was instrumental in leading the Panthers to another East Sequoia League title while qualifying in two events for the Area Meet and one event for the Masters Meet.

Ahmed Ahmed is a two-sport athlete whose teams claimed not one but two league varsity titles and a second place finish at valley this year. In cross country, Ahmed led the team to an undefeated East Sequoia League title, earning Scholar Athlete of the Year and placing an impressive second place team finish at the valley meet right behind the top team in the entire state of California. Ahmed represented CHS at the Woodbridge Classic this year in Portland, Oregon and came in third against elite competition from all over the country.  In track, Ahmed’s team claimed another undefeated ESL championship as he competed in the 800 meter, 1600 meter and 3200 meter events.

Taking the Freshman Class Athlete of the Year award were Brandi Valdez and Marc Navarro.

Brandi Valdez is a three-sport athlete who had the distinction of playing three varsity sports as a freshman. In cross country, Valdez was one of the top runners on a team that finished second in the valley. Brandi placed fourth as an individual at the valley meet, and earned the Golden Panther team award. In varsity soccer, Brandi not only won the CHS varsity team’s Most Valuable Player award, she was given the Co-MVP Offensive Award for the entire East Sequoia League. In the just completed track season, Brandi led her team to an undefeated ESL title, and earned the Golden Panther award for qualifying for the 800 meter and 4×400 meter races.

Marc Navarro is a two-sport athlete who played two varsity sports this year. In football, Navarro was moved up to varsity late in the season, and played one of the more physical positions at inside linebacker. He led the team in tackles in all of the games that he played while on varsity squad. Just this past spring, Marc made the jump to varsity baseball and batted .275 for the year and as a pitcher he recorded 23 strikeouts in 26 innings of pitching for the playoff bound Panthers.
Other Freshman Class Athlete of the Year nominees included Aaliyah Thompson, Gabriella Avila, Emilio Alaniz and Omar Rodriguez.

Aaliyah Thompson of Corcoran has added another honor to her growing list. Aaliyah has been named to the Div. V First Team All-State by Cal-Hi Sports.

END_OF_DOCUMENT_TOKEN_TO_BE_REPLACED

Alice Meik and Brock Rogers are CHS Athletes of the Year