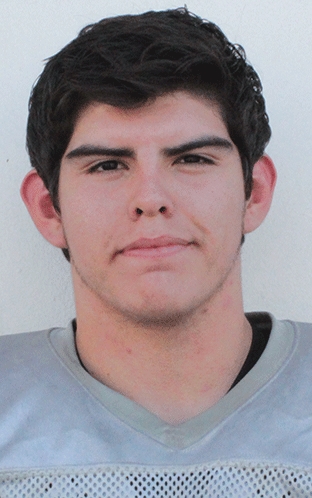 Leading the way was CHS quarterback and ESL MVP Nico Portillo who was chosen as the 2014 All-County player of the year. Portillo, who is a senior at CHS, broke the school’s single game passing record with 333 yards against Hanford West.

According to The Hanford Sentinel, Portillo completed 262 of 406 passes for 3,558 yards with 31 touchdowns all of which are new school records. He led his team to both an East Sequoia League title and a Div. V Valley title while running a new team offense.

On the receiving end of Portillo’s passes was all-county team pick LeGary Austin who broke the school record for season receiving yards with 1,129 while scoring seven touchdowns. Austin is a junior who played wide receiver.

CHS senior Adrian Cisneros who was an offensive lineman made the all-county team as well as defensive lineman Desmond Curtis. Both were ESL all-league first team picks.

Senior Dillon Fugate played both wide receiver and defensive back. He was chosen all-county for a second time and was a first team all-league pick on defense and second team honoree on offense. He had a total of 92 tackles for the season with five solo tackles. He also ended the season with 955 receiving yards and a team high nine touchdowns.

Aaliyah Thompson of Corcoran has added another honor to her growing list. Aaliyah has been named to the Div. V First Team All-State by Cal-Hi Sports.

END_OF_DOCUMENT_TOKEN_TO_BE_REPLACED

CHS Class Athletes of the Year

Corcoran High Class Athletes of the Year were honored during last week’s Athlete of the Year banquet which was held in the Technology Learning Center at CHS. A female and male athlete of the year are chosen in each class. The following are the winners